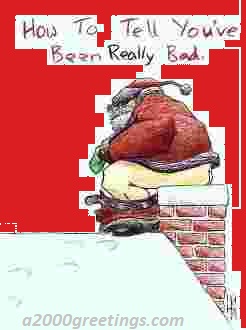 Santa Claus, seems to have done it now. LoL, he has renogtiated a new deal for Christmas Eve! Him and Baba seem to have agreed that they needed to terms to Santa's new contract. This is it.

I regret to inform you that, effective immediately, I will no longer serve the State of Texas on Christmas Eve.

Due to the overwhelming current population of the earth, my contract was renegotiated by North American Fairies and Elves Local 209. As part of the new and better contract I also get longer breaks for milk and cookies so keep that in mind. However, I'm certain that your children will be in good hands with your local replacement, who happens to be my third cousin, Bubba Claus. His side of the family is from the South Pole. He shares my goal of delivering toys to all the good boys and girls; however, there are a few differences between us.

Differences such as: 1. There is no danger of the Grinch stealing your presents from Bubba Claus. He has a gun rack on his sleigh and a bumper sticker that reads: "These toys insured by Smith and Wesson." 2. Instead of milk and cookies, Bubba Claus prefers that children leave an RC cola and pork rinds [or a moon pie] on the fireplace.. And Bubba doesn't smoke a pipe. He dips a little snuff though, so please have an empty spit can handy. 3. Bubba Claus' sleigh is pulled by floppy-eared, flyin' coon dogs instead of reindeer. I made the mistake of loaning him a couple of myreindeer one time, and Blitzen's head now overlooks Bubba's fireplace. 4. You won't hear "On Comet, on Cupid, on Donner and Blitzen.." when Bubba Claus arrives. Instead, you'll hear, "On Earnhardt, on Andretti, on Elliott and Petty." 5. "Ho, Ho, Ho!" has been replaced by "Yee Haw!" And you also are likely to hear Bubba's elves respond, "I her'd dat!" 6. As required by Southern highway laws, Bubba Claus' sleigh does have a Yosemite Sam safety triangle on the back with the words "Back Off."

7. The usual Christmas movie classics such as "Miracle on 34th Street" and "It's a Wonderful Life" will not be shown in your negotiated viewing area. Instead, you'll see "Boss Hogg Saves Christmas" and "Smokey and the Bandit IV" featuring Burt Reynolds as Bubba Claus and dozens of state patrol cars crashing into each other.

8. Bubba Claus doesn't wear a belt. If I were you, I'd make sure you, the wife, and the kids turn the other way when he bends over to put presents under the tree.

We hope you enjoyed Santa's Contract Santa's New Contract has been added to Our Holiday Site for your enjoyment. Please Bookmark, add to favorites and or share. Thank you.